Posted by bchristo on Friday, 26 April 2013 in Fossil Fuels 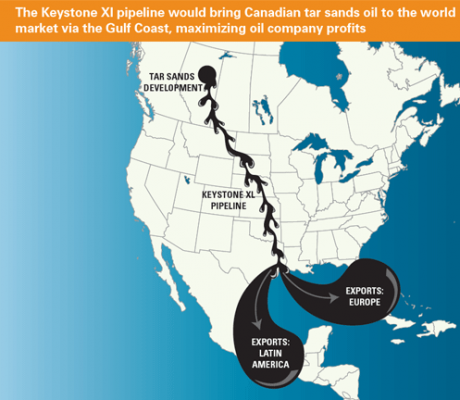 CALGARY, Alberta (Reuters) - TransCanada Corp, Canada's No. 2 pipeline company, said on Friday its long wait for U.S. government approval of its controversial Keystone XL project will further delay completion of the pipeline and push its cost above the company's $5.3 billion estimate.

TransCanada, which reported a 27 percent rise in first-quarter profit on Friday, is waiting for the Obama administration to issue a presidential permit for construction of the line, which is designed to carry 830,000 barrels a day of Canadian and U.S. crude oil to refineries on the Gulf of Mexico coast.

That permit, pending now for more than four years, may face further delays after the U.S. Environmental Protection Agency condemned the State Department's draft environmental review of the project earlier this week, saying it didn't properly address a host of issues ranging from increases in carbon emissions to the pipeline's social impact.

TransCanada, which had maintained that the line could be in service in late 2014 or early 2015, said on Friday the wrangling in Washington will delay its completion until the second half of 2015.

"Due to ongoing delays in the issuance of a presidential permit for Keystone XL, we now expect the pipeline to be in service in the second half of 2015 and, based on our pipeline construction experience, the $5.3 billion cost estimate will increase depending on the timing of the permit," the company said in a release.

Environmental groups have exerted considerable pressure on the White House to block the pipeline, saying it will lead to more greenhouse gas emissions, pollute land and water, and plough through the habitats of endangered species.

TransCanada said it has invested $1.8 billion so far in the project.

While it awaits a decision on the line, the company is proposing a new line that could carry as much as 850,000 bpd from Alberta to Canada's Atlantic coast.

The company launched a process to gauge demand for the line earlier this month. That process runs until June 17 and TransCanada says the line could be in service by late 2017.

Comparable earnings, which exclude most one-time items, were C$370 million, or 52 Canadian cents a share.

TransCanada shares were down 84 Canadian cents at C$48.93 late on Friday morning on the Toronto Stock Exchange.