Posted by rackfokus on Sunday, 21 February 2016 in Fossil Fuels 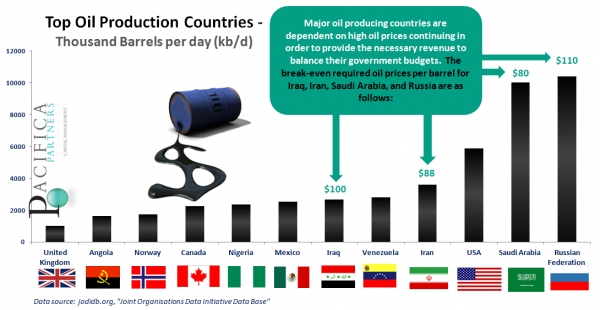 With crude oil prices plunging government revenues have collapsed, and budget surpluses quickly turned into deficits. What's worse, investors are now starting to worry about their ability to pay back their debts. As a result, five oil producing countries were hit with downgrades from Standard and Poor's earlier this week.

The agency slashed debt ratings of Saudi Arabia, Oman, Bahrain, Brazil and Kazakhstan, citing the collapse in crude prices from well over $100 per barrel to $30 as the main reason.

Colombia, another major oil producer, had its credit outlook cut to negative, meaning the agency expects a downgrade soon.

Saudi Arabia had its rating slashed two notches by S&P. Oil accounts for 75 percent of the kingdom's revenue, and tumbling prices have created a huge hole in its budget.

"In our view, the decline in oil prices will have a marked and lasting impact on Saudi Arabia's fiscal and economic indicators given its high dependence on oil," the rating agency said in a statement.

Saudi Arabia ran a deficit of nearly $100 billion in 2015, and ordered a 14 percent cut in spending this year. Its government expects the deficit to be around 13 percent of GDP this year, although even that might be too optimistic. S&P said it believes the kingdom's budget is based on oil prices around $45 per barrel. But that's way more than the current prices of around $31.

Kazakhstan has been suffering for a while. Half of its government revenue comes from oil exports, and its currency has lost half of its value against the dollar in the last 12 months.

Bahrain has been hit particularly hard by the collapse in crude. Roughly 75 percent of Bahrain's revenues come from oil, which makes up 60 percent of its exports. Its debt is climbing rapidly, and the S&P expects it will reach 77 percent of the country's GDP by 2017. The country has relied on help from Saudi Arabia, which is now itself in trouble.

Brazil is another casualty of low commodity prices. The IMF now believes its economy -- the largest in Latin America -- will shrink 3.5 percent this year, down significantly from its previous estimate of a 1 percent contraction.

Oil was rising earlier this week, after Iran supported a tentative agreement between Russia and Saudi Arabia to freeze production at January levels. But the rally hasn't lasted -- oil is down more 3.5 percent on Friday, trading at around $30.